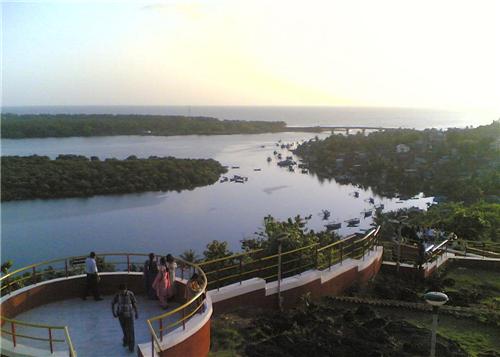 Ratnagiri is located in the Konkan tract of Maharashtra. It is located at 16.98°N 73.3°E. The average height of this area is 36 feet or 11 meters. This area could be classified in to three regions as per geography. The eastern part of the region mainly comprises of the Sahyadri Range and its sloping mountains adjoining the Konkan plain. On the western side is a hilly landscape. In the southern part of this region is the coastline of the Arabian Sea which constitutes of many beautiful beaches. Ratnagiri has a temperate climate with an average high temperature of 31 degrees Celsius and an average low of 22 degrees Celsius.

Topography and Rivers in Ratnagiri

The topography of this region is highly uneven. In this area you will find extremely narrow riverine plains adjoining the coastline. About eighty five percent of the area comprises of hills. Due to its shallow nature the coastline is hardly used for navigation. Most of the landscape of the Ratnagiri district has been influenced by the Deccan lavas.

Savitri, Jagbudi, Ratnagiri, Shastri, Vasishthi, Muchkundi, Vaghotan, Deogad, Jaitapur, Achra, Terekhol, Karli and Kalavli are the major rivers flowing through the region. The waters from the Sahyadri range are the source of these rivers. These rivers flow through deep channels towards the west where they submerge in the Arabian Sea. None of these rivers have a total length of forty miles.

Being a coastal region the climate is moist, humid and there is heavy rainfall. The humid levels barely go below 50 percent through out the year. There are four seasons. The summer season begins in March and ends in May. The south-west monsoon season commences in June and ends in September. From October to November is the post monsoon season and from December to February is the winter season. The average annual rainfall in Ratnagiri is 3,188 mm. May is the hottest month in Ratnagiri. During the monsoon season the temperatures decrease by three to four degrees. Ratnagiri experiences strong winds in its coastal areas accompanied by heavy rains and cyclonic storms.

Comments / Discussion Board - Geography of Ratnagiri