Jaigad Fort and Lighthouse in Ratnagiri

Ratnagiri in Konkan belt of Maharashtra is a place with wonders to be unraveled and explored due to the endless sightseeing options it provides. Apart from the sandy beaches, monuments, religious shrines, waterfalls; the forts in Ratnagiri are really splendid and beautiful creations which exist to this day. Jaigad Fort in Jaigad village which is located at a distance of 56 kilometers from Ratnagiri is an ancient fortress atop a cliff overlooking the confluence of Sangameshwar and Shastri River into the Arabian Sea. Spread across an expanse of 4 acres, the fort is surrounded by a moat and strong bastions on the southern end of the Jaigad stream.

The view of Arabian Sea from Jaigad Fort is spectacular and the fort is quite significant for there being a historical reference of it as the chief ports in Western India. The 17th century fort is located at the angle of the peninsula and it is almost over 500 years old although it is much smaller in size than the Sindhudurg and Ratnadurg forts in Ratnagiri. It is believed that the construction was initiated in 14th century and completed by Sultan of Bijapur and was named after Jayba Mahar‘s sacrificing his life for building the fort. The fort was fortified by Kanholi Angre and exchanged hands several time from Konkan pirates to Sangameshwar chiefs to the Portuguese Maratha kings and finally the British. 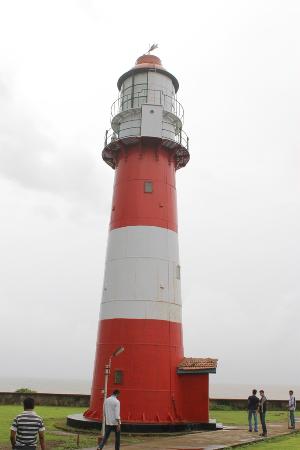 Shivaji also controlled the fort for some time before handing it over to the Peshwas who finally lost the fort to the British in the year 1818. The fortress is well guarded by ramparts and walls from its upper wing to its lower wing as one descends the hill. Barely located at a short distance of 20 kilometers from Ganapatipule and is off Major State Highway 4.
Moreover, added attraction is the Jaigad Lighthouse which is situated close to the Jaigad Fort and is in operation till date. Constructed by a British police officer, John Oswald in the year 1832 ; the lighthouse is nestled atop the citadel of Siddha Buruj with the Jaigad Fort on its eastern fringes overlooking the Arabian Sea. The Jaigad Lighthouse enhances seafaring and navigation for Ratnagiri and Dabhol districts.

The view from Jaigad Fort and Lighthouse are both marvelous with the lush greenery and shoreline of Arabian Sea.

Comments / Discussion Board - Jaigad Fort and Lighthouse in Ratnagiri